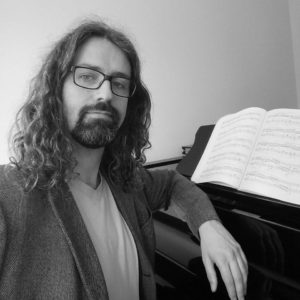 Andrew Thayer was born in Cardiff in 1980. He studied BMus at Royal Holloway (University of London). He continued with postgraduate performance in Birmingham Conservatoire, where he received a PGDip and MA. His teachers have included James Kirby, Victor Sangiorgio and John Humphreys. In recent years, he has also worked on a number of occasions with Alan Fraser, of the "Craft of Piano" method.

Awards include the 2004 Sylvia Cleaver Chamber Music Prize as a member of the 'Trio Gustav'. In 2005 he was awarded the Renna Kellaway Piano Prize, as well as the John Ireland Prize. He was also a finalist in the Symphony Hall Competition, Birmingham. Recent activities include an invitation from the Scriabin association, to perform in an event marking the 2015 centenary of the composer's death. In 2018, he also gave an hour-long performance within Birmingham's New Street Station, which closed two days of performances (as part of the CBSO Debussy Festival).

Musically, he takes great interest in historic recordings of such "Golden Age" pianists as Ervin Nyiregyhazi, Vladimir Horowitz, Alfred Cortot and  Sergei Rachmaninoff. He is particularly keen on the traditions of the romantic era and enjoys analysis of the ideals behind these "freer" approaches to musical performance. Following work with Alan Fraser, however, in recent years he has also begun to specialise in the subject of piano technique. His blog "Mechanically-informed Practical Piano Technique" is grounded in aims of applying highly objective standards of rational analysis. This is blended with sensory-based exercises (heavily inspired by the principles of the "Feldenkrais Method) in order to help develop a wide range of musical possibilities, within a naturally fluid style of motion. In 2018 he will also begin producing a series of instructional video lectures.